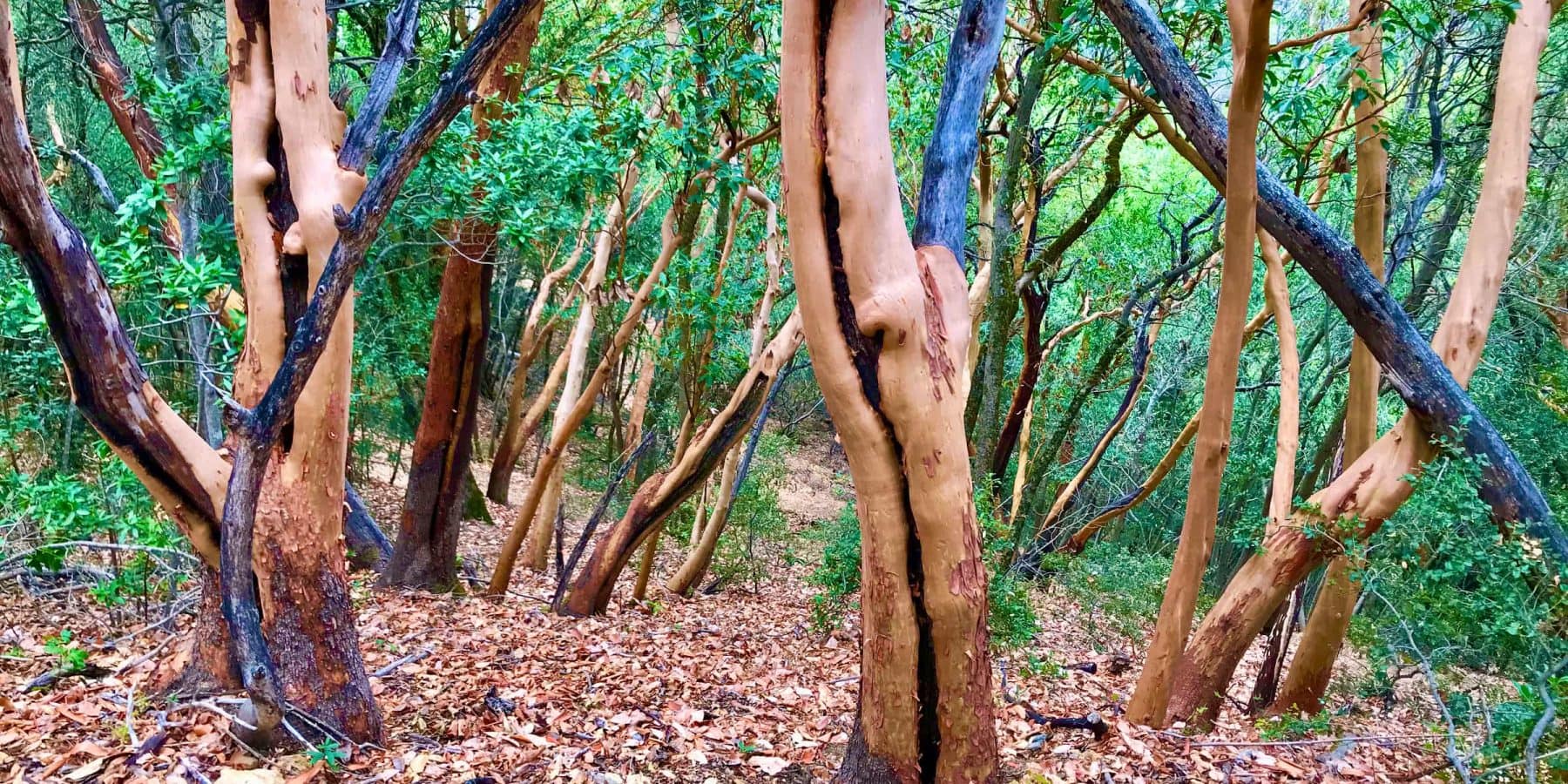 The uniquely charming madrone tree is often cast as the other red tree of the Santa Cruz Mountains. Ironically though, its bark achieves far richer hues than the so-called redwoods, which are named more for the heartwood at the center of their trunks, and ranges from deep garnet to vivid crimson. Certain American Indian tribes along the west coast considered the tree legendary and sacred, perhaps due in part to its unique appearance and the many varied medicinal uses of its berries, bark and evergreen leaves.

Though in a separate but related genus, the madrone’s shrubby cousin, the manzanita, shares many of these characteristics, both aesthetic and utilitarian, and one rarely talks about the one without referencing the other. Madrone’s and manzanita’s, in general, are familiar sights in the Santa Cruz Mountains if you know where to look. Madrones are found most often in mixed hardwood forests among other trees like douglas fir, California bay laurel, tanoak, and redwood. Manzanitas stick mostly to the chaparral, the sunny, sandy environments typical to ridgetops.

The Skyline to the Sea Trail meanders by madrones and manzanitas at many points on its 30-mile sojourn to the ocean, especially in Castle Rock State Park and Big Basin Redwoods State Park. Castle Rock is home to a particularly brilliant grove of madrones growing along the Travertine Springs Trail near Castle Rock Trail Camp. Manzanitas abound on the rim of Big Basin, particularly on the Skyline to the Sea Trail by its northwestern boundary. And of course, as noted in our Sandhills Article, the unique silverleaf manzanita can be spotted in Henry Cowell Redwoods State Park in the San Lorenzo Valley, along the Eagle Creek Trail near the campgrounds.

Berry, berry interesting! Both the madrone and manzanita boast tasty fruit, though interestingly their berries are one of the most significant differences between the two related plants. The madrone boasts more traditional berries, though being somewhat bitter they are prime candidates for preserves. The manzanita actually is named for its berries, being the Spanish word for “little apple.” These come dry and powdery in the center, and are traditionally ground to make an unfermented cider, crisp and high in Vitamin C. Just remember- you should never pick berries (or leaves, bark, flowers, mushrooms, etc.) unless you have permission from the owners/managers of the land and know exactly what you’re looking at. Plants growing in parks are off-limits, so if you’re from out of town, best cozy up to the locals.

Though not considered endangered or threatened as a species, particularly in the Santa Cruz Mountains, like all living things, and trees especially, the stately madrone does have its vulnerabilities. In 2016 the largest known pacific madrone tree in the world, at 125 feet tall and 25 feet around, was devastated and likely killed in the Soberanes Fire in Big Sur. This was undoubtedly a sad day and a somber revision to the record books, and a valuable lesson in fire ecology and wildfire management.