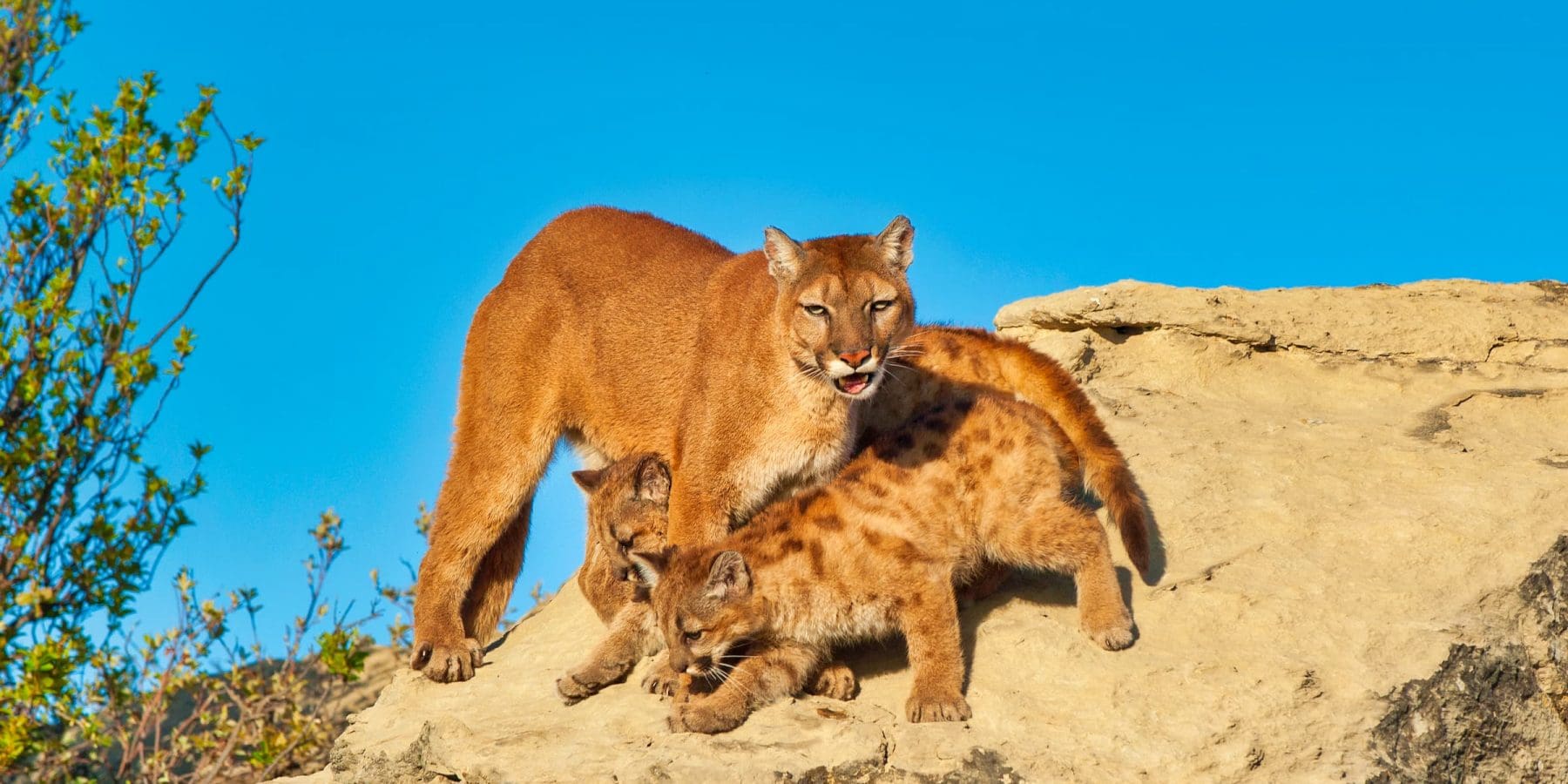 Mountain lions are literally at the peak of the Santa Cruz Mountains wild food web. As apex predators, they reign over their habitats with equal parts ferocity and grace. As a keystone species, they play a vital role in regulating not only the population of the grazers and pests they prey on, but their own populations as well. As an icon of modern California environmentalism, they’re a beacon of hope and a testimony to natural preservation.

A rose, by any other name, is still a mountain lion. Puma, panther, and cougar are all interchangeable terms for the same species, the Puma concolor. Interestingly, cougars aren’t considered “big cats” as that term is reserved for lions, tigers, jaguars, leopards and snow leopards exclusively. You could think of our panthers as biologically more like oversized house cats, which explains why they don’t roar, though they do purr.

You may be worried about getting attacked by a mountain lion. If that’s the case, you should probably start fearing lightning or winning the lottery, because those things are much more likely to happen to you. Of course, just as you would stay out of the pool when thunderstorms roll in, you still want to avoid walking your dog in the woods at sunset. In that situation, though, your dog is the one in danger of becoming a snack. In the last century or so there have only been two mountain lion attacks on humans in the Santa Cruz Mountains, and the one in 1909, at least, was found to have rabies. The one in 2014 happened to a small boy, who survived and was even released from the hospital the next day.

Of course, if you do encounter a lion in these mountains, you’ll want to be prepared. Like a movie velociraptor, it’s incredibly unlikely that you are going to see it before it sees you, so if you do see one you can bet it allowed you to see it rather than simply pouncing on you. Unlike that movie velociraptor, however, pumas almost always hunt alone. For the most part, mountain lions are easily spooked by people and make a quick getaway at the first hint of our approach, but factors like fresh kills, habitat loss, the presence of cubs or the need to feed them, and disease can make any animal act in unpredictable ways.

The best thing to do if you happen to see a puma is to make yourself as large and loud as possible without actually making aggressive moves towards the cat. Don’t bend over or run away; these are prey behaviors and may trigger them to hunt you. Eye contact is also a no-no. If you have a pet or a child handy, put them on your shoulders and shout a lot. Wave your arms but don’t take a step towards the cat. Make it clear that you are more trouble than you are worth, but don’t put the cat on the defensive.

Since hunting mountain lions for sport was made illegal in California in 1990, the population has thrived in habitats statewide, with the total population estimated at four to six thousand. About 60 pumas are legally killed in the state every year, mostly due to them predating on livestock, an increasing occurrence as natural habitats continue to be destroyed in favor of residential and agricultural development. UC Santa Cruz’s Puma Project is an excellent resource for information on our local mountain lions, as they conduct research by trapping, collaring, and releasing the cats to study their behaviors and track their movements.