Did you know that most wineries are closed on Sundays after September 1st?

We didn’t. So, when we set out Sunday to go fall wine tasting, we had no idea that it would be our first foray into “Off Season Wine Tasting”!

After realizing that most wineries were closed, we found two winery websites that indicated they were open and headed out to Watsonville. Our first visit was to Wargin Wines. Their tasting room is open Saturdays and Sundays, noon to five. They are a family owned operation, run by Mikael Wargin. In business for approximately seven years, the winery manages small vineyards in the Santa Cruz Mountains AVA and sources their other varietals from a few surrounding counties. One of the great advantages of visiting small, independent wineries is their friendliness and openness to share stories about their wines. And, often you get to meet the vintner like Mikael.

We were so eager to start our adventure that we arrived at 11:30am. Fortunately for us, the doors were wide open, so we let ourselves in.

The walls around the room showed off the artwork that does double duty as labels for his wines. The labels are created by tattoo artist friends of Mikael, including the Big and Beautiful fairy that also graces his logo. Mikael and his crew just happened to be at the tasting room that day because they had been out picking grapes. Without hesitation, Mikael welcomed us to the bar and offered us a drink. He then proceeded to bring out two different varietals of, fresh from the vine, grapes for us to sample, including cabernet grapes that were surprisingly sweet.

While their tasting menu mainly consisted of reds, we started the tasting with a Pinot Gris. A wonderful light wine that would be great served cold on a hot day. We then tasted five reds, including Barbera, Negrette, Calistoga Petite Sirah, and two El Dorado Petite Sirah’s. It is surprising how different the three Petite Sirahs tasted, the first being nice but mild, the second wonderfully dry and the last so sweet it would serve well as a dessert wine. Negrette, one of our favorites of the reds, is being released in early October, so it does not have the final artwork on the label.

In addition to weekend wine tasting, Wargin Wines also holds the occasional event to share the love of wine with others in the community.

Such as, the Blend Your Own Sangiovese/Freisa class which couples and creates their own custom blend of wine which is then available to buy by the case at a 40% discount.

From Wargin Wines, we moved just a few blocks away to Integrity Wines, which is also open noon to five both Saturdays and Sundays. We met two of Integrity Wines’ owners, Mark Hoover and Eric Silverman, with Mark making the wines and Eric selling them. Our time at Integrity Wines was memorable. For a second time that day, we were welcomed in with open arms and a smile. The tasting room was a simple bar with oak barrels running the length of the store and two one-ton plastic bins along the wall.

After admiring the Princess in Training bedsheet covering one of the bins, Mark explained the grapes in the bin were still fermenting, not quite ready for the barrel. In the far back of the room is the processing center where people from the community can come in to help with the crush. For the owners of Integrity Wines, making great wines is only one of their goals. They want to celebrate the whole experience and their passion for wines with the community.

Eric started our tasting with a wonderful Pinot Grigio, their most locally sourced wine.

We then tasted a Sauvignon Blanc and a couple of Chardonnays. While the Chardonnay from Arroyo Seco was dry and crisp, the Chardonnay from Santa Lucia Ridge was more traditional with the oaked and buttery tastes. It is this Chardonnay that won not only double gold in southern California but won the silver in the 2017 Monterey International Wine Competition. For a unique comparison, we were offered a taste of Chardonnay grape juice before it was fermented. Next came the Rose, which is a blend of Pinot Gris and Pinot Noir. It is a light wine, best-served ice cold, with just a hint of strawberry. The Rose is also their only unfiltered wine.

To round out the tasting, there was a Pinot Noir and a couple of Cabernet Sauvignons. Though not on the menu, Mark’s premier wine is a Riesling. Since Rieslings have fallen out of fashion in recent years, they opted to produce a much smaller quantity than their other varietals. Which is why, when their Riesling skyrocketed into such popularity after a few tastings, they sold out. They intend to produce four times that amount next year. Also, on the horizon is a Cabernet Sauvignon from the Santa Cruz Mountains AVA.

Both wineries are located in a work/industrial park and only a two minute drive from each other.

Bicycling between the wineries is encouraged and easy. Don’t be fooled by the locations. Wargin Wines and Integrity Wines are fun, personable, professional and a great way to see how the wine business works up close.

With several bottles in hand, we said our goodbyes and took Eric’s advice and headed to Ella’s at the Airport for lunch. Mere seconds down the road found us in a window seat enjoying the view of small planes taking off and landing. The menu offered a nice variety of both breakfast and lunch. It was the perfect ending to our wine-filled day. 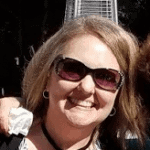 Rebecca Olker works as an Accountant in Santa Cruz. She enjoys wine tasting, knitting, going to the beach with her dogs and spending time with family and friends. She enjoys sharing her writing on various interests and sites around Santa Cruz.

It’s organic––of wine, relationships, and terroir When I’d mentioned to family and friends that I would be taking a wine tour with The Santa Cruz Experience on a weekend when Santa Cruz faced yet another heavy rain, everyone said the same thing, “That’s a perfect way to spend a rainy day!” Indeed. The drizzly day began…

Good wine is always a personal process. Each winemaker is responsible for his or her unique flavor, style, and presentation of the wine they create. Making a glass of good wine isn’t just about putting the right ingredients together for the right amount of time, it’s a personal expression of a winemakers process and personality. …