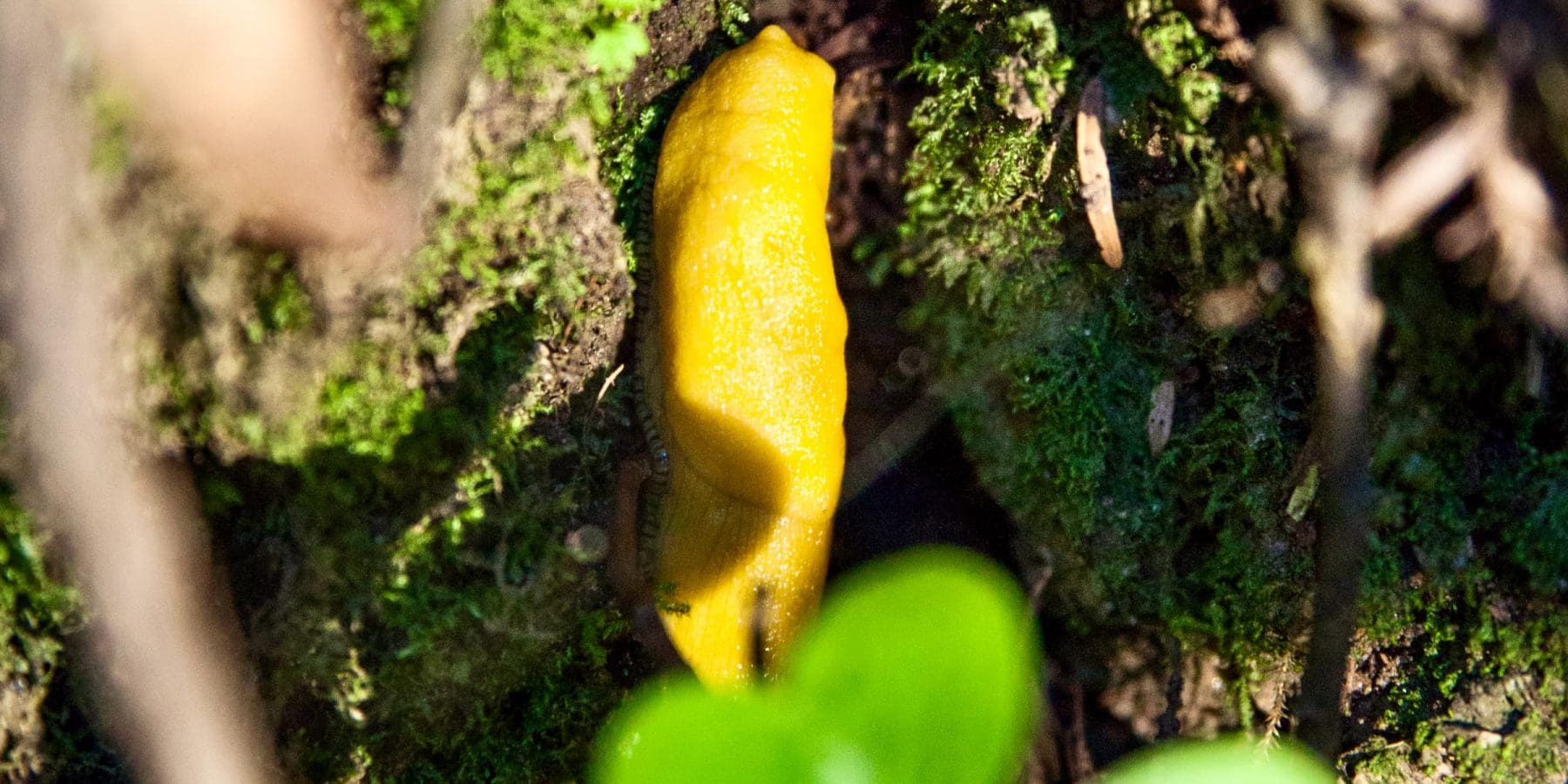 Banana slugs are fascinating, even mesmerizing to observe in person. Watching one slide its way down a portion of a miles-long trail or up the side of a towering redwood is a meditative experience. However, despite their low speeds, they’re not always the easiest organisms to track down. Like a good hunter does their prey, one must understand the banana slug to find it.

First off, be nice! Yes, we’re using the phrase “hunter” somewhat liberally here, as we’re not suggesting that you kill and eat banana slugs, though there are people who do. If you find a banana slug, take care not to step on or otherwise hurt it. While not technically an endangered species, they are quite important to the health of the redwood forest. Plus, all of the best places to find them are in parks where they’re protected by law.

Keep track of where and how many; most redwood park visitor centers have displays, journals and/or maps where the public can share their nature encounters, and of course there’s always social media. If you find a good spot or trail for finding slugs, pass it along to the next adventurer!

If you do take photos of banana slugs and post them to social media, be sure to tag them to the park where you found them to encourage others to visit.

Wet, cool, and cloudy days are best. Banana slugs are active at night, but of course, it’s dark at night, making them harder to find. They may be bright yellow, but they don’t glow in the dark! Plus the parks where they’re found tend to close at night. Sometimes in the summer and early fall, the only time during the day one has a chance to find them is around dawn and dusk, when it’s cooler.

Slugs love it when it’s wet outside, in fact, they breathe through their skin, so they need it to be wet. However, if it’s raining too hard, they can drown in puddles. Sprinkly days or the days after a heavy rain are perfect. On such days people have counted hundreds of slugs in just a couple of miles at certain parks.

Long summers and droughts can be dangerous for banana slugs. Again, they need to stay wet and slimy to breathe, so when it gets too hot and dry, they’re forced estivate. That’s essentially the same thing as hibernating, but for the opposite reason. They’re easier to find the rest of the year, particularly late winter to early spring when it’s wet. This can be a bummer for summer soldiers, but makes a great excuse for visiting in the offseason!

Deep redwood forest is their primary habitat, as the tall trees provide enough shade to keep things relatively cool and damp. If there’s a creek or other water source nearby, so much the better!

Butano State Park in Pescadero might be the best park in the Santa Cruz Mountains for banana slug viewing. If summer is your only chance to search for slugs, Butano is probably your best bet in the area.

Henry Cowell Redwoods State Park in Felton is another great park for banana slug viewing. The Redwood Loop, a .8- mile ADA-accessible trail next to the visitor center, has enough old growth redwoods on it to keep the shade and moisture in most of the year, just the way the slugs like it. The River Trail is another good bet, though the slugs tend to avoid the sandier parts of the San Lorenzo’s banks.

Big Basin Redwoods State Park is another slug hotspot, and a big park to boot. You can’t go wrong with most of the park, but stay down in the basin itself with the redwood trees. The ridges of the park tend to be chaparral, with dry sandy soil that the slugs avoid. For ease, the Redwood Trail at park HQ is another ADA-accessible trail, of just over a half mile, with lots of old growth redwoods on it, so you don’t have to pick and choose between natural wonders. There’s also a creek nearby.

Banana slugs tend to shun dry, scratchy surfaces like sand, limestone, and fine gravel, so you can too.

Slugs have no bones and can squeeze into extremely tight spaces, like under rocks and logs or in the crack of a car door. This is how they hide from the heat so well. While one shouldn’t go around disturbing habitats, don’t forget to peek into the nooks and crannies when possible.

Wet weather is good for slugs but less so for humans. Dress appropriately for the weather. If you’re visiting from outside of the redwood forest, remember that they are often darker and wetter than other microclimate zones. They can stay wet for a long time after rain as well, and drip water from the redwood needles for days after a storm.

You can always try calling the specific park you want to visit to ask how the banana slug sightings have been lately. Citizen science apps like iNaturalist are a great way to find and share locations for banana slugs, and lots of other wildlife to boot. Banana slugs aren’t endangered, so you can geotag the locations exactly.

The Skyline-to-the-Sea Trail runs about 30 miles, depending on where you start and what side quests you settle on. Fulfilling the promise of its name, the trail dips, climbs and winds from the peaks of the Santa Cruz Mountains to the shores of the Pacific Ocean. On this epic journey, it passes waterfalls, springs and creeks, wetlands and chaparral…

Billed as the gateway of the Santa Cruz Mountains, Castle Rock State Park earns that title in spectacular fashion. A great staging ground for a number of adventures, from bouldering to rock climbing, day hiking to backpacking, and even birding. The crown jewel, Goat Rock, is a limestone formation that is typical of the park’s geology…