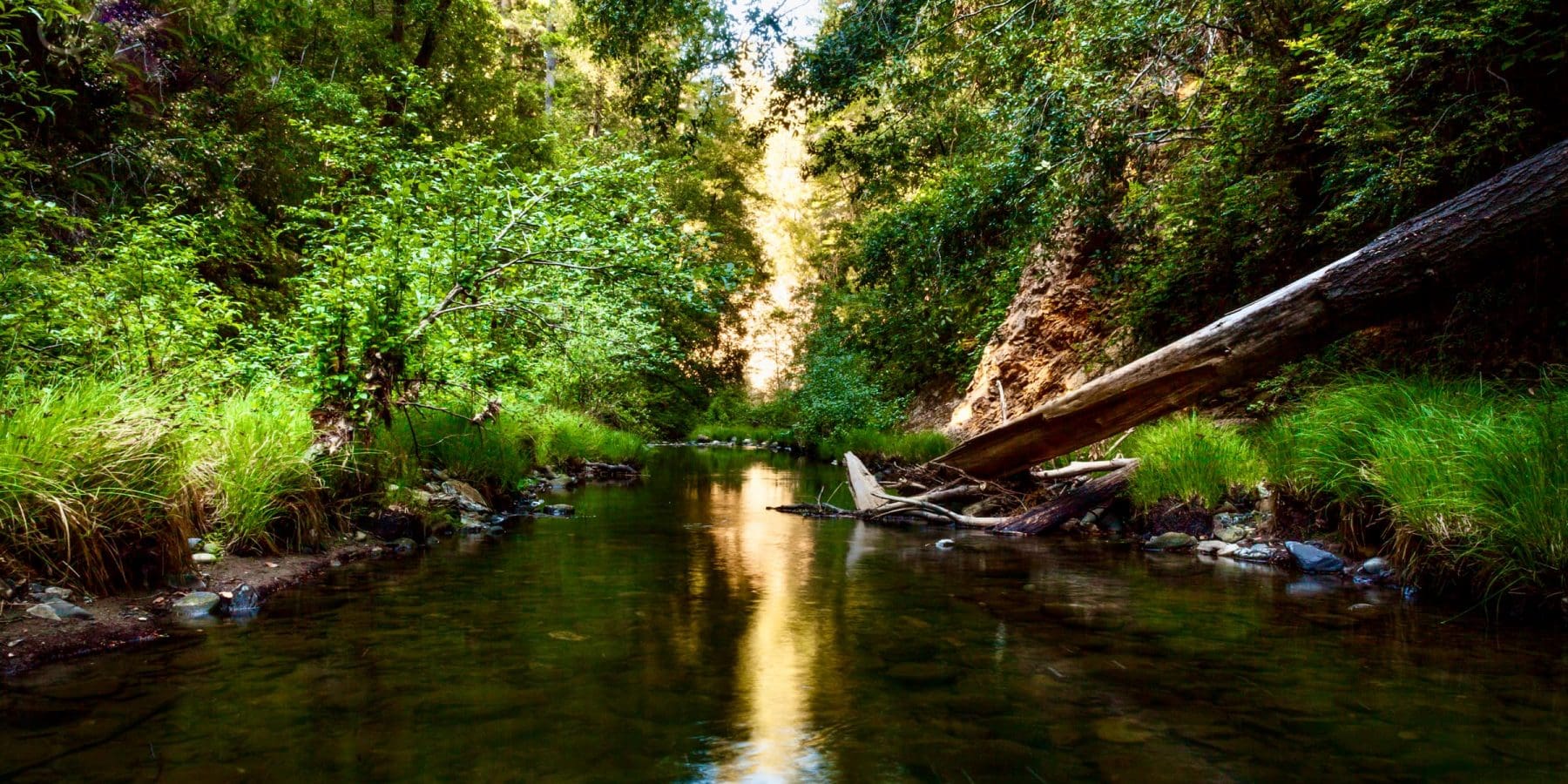 Coming into Portola Redwoods State Park is akin to entering Doyle’s Lost World. Winding down a seemingly-forgotten road, watching as the ferns and huckleberries grow taller, the human population drops conspicuously. Cell service vanishes entirely, and it’s hard not to be overtaken by a growing sense of adventure and wonder. Named for the explorer Gaspar de Portola, whose 18th-century overland expedition passed nearby, the rich ecology of the area once supported one of the largest Ohlone tribelets, the Quiroste. Now it’s a mainstay for savvy mountain visitors who’ve already gotten their fill of other, more popular parks in the area. Portola boasts many of the same attractions, including perpetual waterfalls, old-growth redwoods, and exceedingly rare wildlife.

Portola is considered one of the more dog-friendly state parks in the Santa Cruz Mountains, though like most others they don’t allow dogs (other than official service animals) on their trails or fire roads. If you’re looking for the exception, Butano State Park in Pescadero allows them on their fire roads- see our guide here! While Portola requires they stay on-road and on-leash, they do have a couple of service roads that allow dogs (and their humans) but not public cars, so auto traffic is significantly reduced. Check out the detailed and colorful “Choose Your Own Adventure” sign by the Visitor Center for the hiking highlights.

The main campground offers tent and RV camping under some significant redwood specimens, though they keep the best ones on the Peter’s Creek Grove (see below). They only offer 55 campsites, which means that despite the park’s general remoteness, weekends in the summer are typically quick to fill. Midweek visits are recommended anyway for those who like to avoid the crowds typical to hotspots like Big Basin and Henry Cowell. Just watch out for the ticking clock- the campground’s closed November through March.

The Peter’s Creek Grove hike is probably the park’s main event, particularly for seekers of old-growth Sequoia Sempervirens. It’s a 12-mile round trip trek from the Visitor Center. Essentially an out-and-back hike with a little 1.5-mile loop at the far end where the namesake creek feeds a redwood grove estimated to be the third oldest in the Santa Cruz Mountains. It’s a significant day hike, though some savvy adventurers like to break it up (or extend their stay) by camping at Slate Creek Camp, the park’s only trail camp, just a couple miles in from the Visitor Center.

Attention pack rats: Slate Creek Camp is not just for those looking for a head start on the Peter’s Creek Loop, it’s also a great way to connect other trail camps in the mountains, for instance, Castle Rock Trail Camp at Castle Rock State Park. It’s a full day’s hike between the two locations (10+ miles) and can be quite hot in high summer with significant travel along exposed ridgelines, but the route allows you to explore not only two excellent state parks but the magnificent Long Ridge Open Space Preserve as well. Just make sure you have a map that covers the whole range! Slate Creek (and Portola in general) can also connect to other parks, such as Big Basin via the Basin Easement Trail. Though at the time of the writing of this article that trail has been closed for the summer.

Whatever your MO for staying at Slate Creek, just remember the creek itself (and only water supply) is about ¼ mile from the campgrounds, and watch out for the latrines toilet seat- it’s notorious for shifting and pinching, ah…certain vulnerable body parts- BM’ers beware! These spots do require a reservation but typically have availability, especially on any night other than a summer Saturday. More info on Santa Cruz Mountains Backcountry Trail Camps.

This park is known for being less-trafficked than some of its better-known neighbors, but the difference is most stark midweek and in the off-season, when it can get almost eerily empty. That said it has suffered extended closures in recent years due to winter storm damage, so you don’t want to push it too much. The possibility of getting stuck there is real, so definitely check the roads and the weather particularly if you’re considering a winter rendezvous there. As mentioned above the car campground is closed November through March so, other than backpacking, day visits are the only off-season option.

Of course, crowds aren’t always a bad thing, especially for those looking to get a little more out of their stay with some traditional parks perks. Summer is the only time to enjoy the campfires, kids programs, and guided hikes offered by the park’s dedicated staff and volunteers. And due to the sheltered, shady nature of the basin in which the park sits, you can find banana slugs sliming around on the ground deep into the summer, plus rare flora like the Dudley’s Lousewort.

The roads into the park are quite curvy, so take it easy, especially if you have sensitive tummies in the car. The last several miles into the park is mostly a one-lane road so you’ll want to keep the speed reasonable anyway. And watch out for bicyclists!

Parking is $10, which like all state parks lets you access any other state park in the area for no additional charge until sunset. Of course, any other state park is going to be quite a drive from Portola, so that may not be the best value-add in this case. They do accept the yearly passes if you have one (the CA State Parks pass, not the NPS ones).

As mentioned multiple times in this article already, Portola Redwoods State Park is loved in large part due to the serenity and seclusion found there. The flipside, of course, is that low traffic means high risk, as if you get lost out there it may be a while before someone finds you. Make sure you pick up a trail map and bring plenty of water and snacks with you. Some trail junctions are quite close together and can be easy to walk right on by, so pay attention before you tread off track.

Make sure you gas up and come prepared- the nearest conveniences are significant drives away on windy one-lane mountain roads. The “store” at the visitor center is very minimal and only offers small souvenirs plus a few snack options like chips and bottled water, and that’s it.

Even without full-on storms, the trail conditions can change quickly. The park website offers information about trail conditions, but a phone conversation with a human staffer or volunteer on-site is ideal- if you can reach them. Worth a try anyway! Give them a ring at (650) 948-9098.

Though it’s not the biggest park in the county, there are hiking, biking, and equestrian options beyond what’s described here. It’s strongly recommended that adventurers go by the Visitor Center and talk to the docents about hike ideas, trail closures, wildlife sightings, and whatever other…