If a man can bridge the gap between life and death, if he can live on after he’s dead, then maybe he was a great man.

I suppose the same could be said of places. It seems Brookdale Lodge has not only bridged its own life and death, but transcends dimensions too. Manifestations are commonplace here, but its latest has locals and historians celebrating, courtesy of hotelier Previn Patel who doesn’t believe in ghosts but does believe in destiny. He feels that his ownership was simply meant to be, and if true, would mark the first time the property had seen such serendipity.

Nestled in the enchanting redwoods of the Santa Cruz Mountains in the San Lorenzo Valley, the former getaway of Hollywood A-listers rests in the town of Brookdale, population 1063. The sleepy hamlet with deep roots in the lumber trade once saw its thriving industry come to a drastic halt when the escalation of clear-cutting in the vast redwood forest between Felton and Boulder Creek resulted in a decrease in lumber prices. This forced The Grove Mill Lumber Company to declare insolvency and resulted in the sale of the property in 1900 to Judge James Harvey Logan––the namesake of the loganberry, a happy accident between blackberries and raspberries. He developed the 400-acre tract on both sides of Clear Creek into a campground and lodge.

But happiness would elude the family in 1918 when Sarah, the six-year-old niece of the judge, drowned in the creek.

This resulted in the sale of the property in 1922 to Dr. FK Camp who built the world-renown Brook Room over the fateful creek. Billed as “Dr. Camp’s Mountain Brook through the Dining Room, in the Heart of the Big Tree Country Santa Cruz Mountains” a flyer of the time urged the adventurous and wealthy to “linger with us and listen to the brook singing merrily through our dining room” touting the room’s uniqueness saying, “In all the world nothing like it.”

No one can argue with that.

“They all used to party here,” says one resident.

The more nefarious story-behind-the-story captures the imagination, filled with tales of Al Capone’s connections to the hotel. Legend has it that a series of underground tunnels and “meat locker” provided the perfect venue to serve up torture with a side of spirits. After a hard day working for Scarface, minions enjoyed the mermaid room where legend has it men picked their favorite beauties from naked women swimming on the other side of the aquarium glass in a bi-level pool.

But it’s the other hair-raising stories that swirl around the place that seems to define the lodge unlike any other.

Rumored to be the most haunted site in all of California, with no less than forty-nine spirits deciding to never check out, all kinds of portals and vortexes have been discovered by paranormal experts. These spots supposedly allow spirits to come and go as they wish with guests reporting everything from phantom smells of gardenias to sounds of big band music, and sightings of full body apparitions dancing on the dance floor to whispers in empty rooms.

Over the not-too-distant past tragedy, has continued to visit the lodge when a 13-year- old girl drowned in the pool in the 1970s and a 35-year-old woman fell to her death in a construction hole in 2009. Their restless spirits are said to have joined the haunt.

When commenting on why he decided to purchase a property known to have so much paranormal activity, he simply said he didn’t believe in ghosts. One of his first orders of business involved the restoration of the old James Dean mural. A man on a mission to set things right, the owner points out that locals had felt they’d lost a friend when the old mural of James Dean got painted over during one of the lodge’s past lives.

In his quest to repaint the mural, Patel discovered Salinas artist John Carey when he visited a convenience store on Hwy 46 to admire the mural there that commemorates the celebrity’s last stop before his tragic car accident. Patel read the writing on the wall and contacted the artist about painting a mural for the lodge. The rest restored history. Now James Dean is back where he belongs hanging out on the exterior wall of the Brookdale Lodge.

Patel has invested $4 million dollars in the renovation which will occur in three phases. The current phase updated the accommodations while subsequent renovations look to the resurrection of the historic Brook Room. Patel’s other holdings include the Pacific Inn and Days Inn in Santa Cruz.

“I don’t know any other restaurant in this country or maybe even the world that has an actual creek,” Patel says, with a boyish smile. And while that may be there is probably no other dining room that has as many legends either. One includes a famous fish story involving President Hoover catching and reeling them in off the bridge in the Brook Room, then having the cook prepare his catch for dinner.

Those who are easily shocked should be shocked more often.

Take Mae’s advice if you dare and see if your visit to Brookdale Lodge leaves you wanting more. 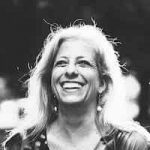 Bed & Breakfasts in the Woods

Stay at Fern River Resort – Feels like a Summer Camp

Nestled behind Henry Cowell Redwoods State Park, just off the ever meandering highway 9, lives Fern River Resort. Fern River is a charming gathering of cabins in the redwoods fit for large family vacations, weddings, or even just a romantic getaway for two. Fern River Resort was founded in 1929, years after a boulder containing…