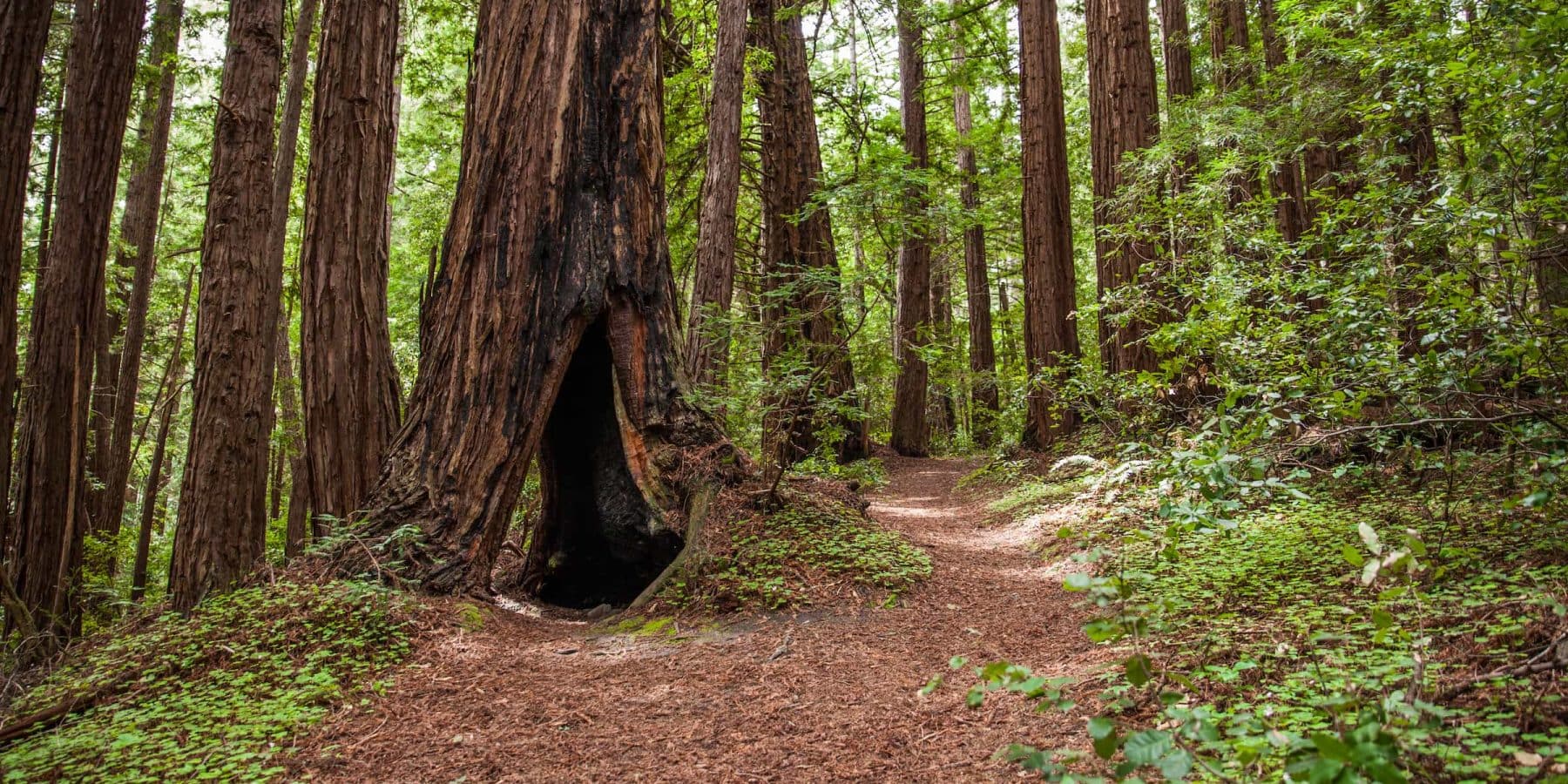 Butano State Park doesn’t have the enormous ancient redwoods you’ll find at other Redwood State Parks, though it’s rumored that in some secret corner, far off-trail, there hides one of the tallest specimens in these mountains. Still, it more than makes up for lack of accessible old-growth groves with its biodiversity and panoramic views. The park’s connection to California Indian and Ohlone history is rich as is its archaeological significance, as it lies directly along an ancient trading and seasonal migration route, mainly used by the tribelet that controlled the area, the Quiroste (KEER-osh-tee). Now it’s a green and pleasant park, great for day hikes of all sizes, car camping, and short backcountry overnight trips.

For once, Fido is welcome! One very cool distinction that Butano boasts is that it allows dogs, on leash, on its fire roads (still not on trails, though) as well as the usual campgrounds, picnic areas, and paved roads. You gotta pick up after them of course, and please don’t be the one who bags it up but leaves it there, bag and all, letting the environment take one more for the team. The feces itself can carry all kinds of stuff; bacteria, invasive plant seeds, etc. and the plastic takes forever to biodegrade. Set a good example for your fur babies and clean up after them properly, your fellow park visitors will appreciate it!

I can see for miles! The park boasts an abandoned airstrip, thought to have been built during World War II as an emergency landing strip for a fighter squadron based in Half Moon Bay. As a panorama, it has everything you could ask of the Santa Cruz Mountains- ocean, valley, mountain, and forest. The Ano Nuevo Trail is also replete with beautiful vistas, but no need to be redundant- find hikes to both locales on our Awesome Panoramic Views blog post.

Seeking banana slugs? We did that already too! Follow this link to our Slug Hunter’s Guide. You’re in luck though, this is the park for it!

If you want to make your trip an overnight, Butano Trail Camp is a cool spot located just a half mile from the airstrip mentioned above, an excellent opportunity for night hiking and stargazing, when the weather’s not foggy, that is. The only water available is the surprisingly drought-resistant Indian Creek, approximately .7 miles downhill from the trail camp, so be prepared to purify it and haul it up to your site. It’s the only trail camp in the park, and the fire road connecting Butano to Big Basin Redwoods State Park is marked for official use only, so unless you go on a state-guided trip you can’t really incorporate it into a larger multi-night backpacking trip. If you do stay here, make sure to bring rain gear, even in the summer, as it has been known to drizzle in August.

Salaman-duh! If you’re interested in amphibians, like ensatinas, California slender salamanders, California red-legged frogs and California newts, then coming to Butano is no a no-brainer. Call the park if you want to get their recommendations for trails and hotspots for observation, which can vary year-to-year or season-to-season, but stick to the creeks, and you’ll probably do fine, especially in the wetter seasons.

The park is open sunrise to sunset for day users. Car camping season is April 1st to November 30th, though be forewarned they don’t have showers in the campground. The backpacking season seems to change every year, but more information on reservations, as well as a viewable trail camp availability calendar, is available on Butano State Park’s official website.

Weather or not! As alluded to before, don’t come expecting 100% sunshine just because it’s summer. Butano ridge is close to the ocean, trapping in that infamous Santa Cruz marine layer, so summer can be foggy. That can keep temperatures reasonable, but it has been known to swing too far and reach the point of light sprinkling, even late in the season. This can be a boon for wildlife observation, especially of the parks banana slugs and salamanders.

Don’t worry, Lancelot, you don’t have to pick one season with this park. As with all redwood parks, there’s beauty to be found year-round, as long as you’re adequately prepared for the weather. That said, Butano is relatively unknown compared to many of the more famous redwood parks of the Santa Cruz Mountains, so even in the summer, it’s uncrowded, particularly in the backcountry. December through March the place can get downright empty. That can be quite a serene experience, but be safe out there- the buddy system is not just for schoolkids and scouts.

Go to the Visitor Center and Butano State Park main entrance where there’s a small parking lot, and like just about every other State Park in the area parking is $10.

One conveniently awesome aspect of the park is its relative proximity to a variety of other great spots, like Ano Nuevo State Park and its lovable behemoths, the elephant seals. Continue a little further south and find the Rancho Del Oso Visitor Center at the extreme southwestern boundary of Big Basin Redwood State Park, a great place to launch day hikes up the Skyline to the Sea trail. Or head along the coast in either direction to find beach after spectacular beach. Plus, Pescadero is a fun town to play tourist in on your way through to other adventures.

More information about the park and its hours, as well as digital versions of the official park brochure and map are available at Butano State Park’s website.

Know where you’re going, from driving route to hiking route and back. Be realistic about your plans- if you have hikers in flip-flops, then the 10-mile airstrip loop hike isn’t in your future. The Ano Nuevo Trail is beautiful but too steep for strollers, wheelchairs or walkers. We all know that the more planning you do, the more you’ll be able to enjoy your time at the park, it’s just a matter of doing the legwork (yuk yuk, get it?)

Maps are usually available at the kiosk by the visitor center, but it’s not staffed enough to be reliable throughout the year. Better to bring a copy just in case- you can easily find printable versions online. A digital copy on your phone will work as well, but printed maps never run out of battery or short out when wet.

However you get your park on, you should do it right, and that means proper gear. This varies depending on the activity, but these universals will serve you well; plenty of drinkable water, a detailed map of the park, layers of clothing, close-toed hiking boots/shoes, weather-appropriate gear, a first aid kit, a flashlight, snacks. Bring ‘em!

One can experience an excellent hike to the iconic Berry Creek Falls by hiking a 9-mile out-and-back trail from Big Basin Redwoods State Park HQ. Of course, the full splendor comes on the 11-mile loop, with three additional waterfalls, all of them along the spectacular Berry Creek Falls Trail. Be forewarned; both are strenuous backcountry…

Billed as the gateway of the Santa Cruz Mountains, Castle Rock State Park earns that title in spectacular fashion. A great staging ground for a number of adventures, from bouldering to rock climbing, day hiking to backpacking, and even birding. The crown jewel, Goat Rock, is a limestone formation that is typical of the park’s geology…